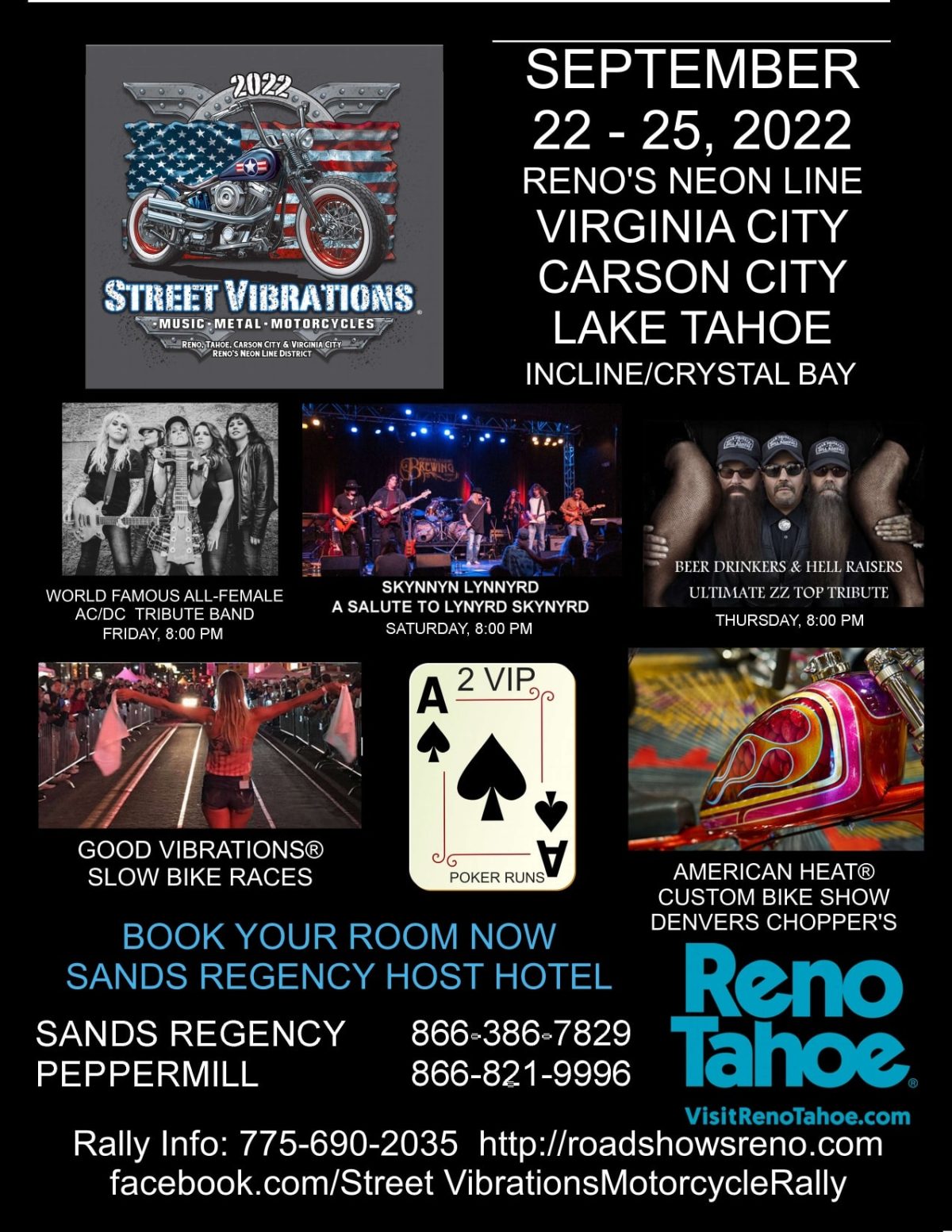 The Street Vibrations Motorcycle Rally is Thursday to Sunday all over Downtown Reno, Virginia City, Carson City and Lake Tahoe.

Street Vibrations Motorcycle Festival is a celebration of music, metal and motorcycles, offering poker runs, live entertainment, ride-in shows, stunt and bike shows and more to more than 35,000 riding enthusiasts. This event is so big, it rocks at several locations throughout the region. Major event venues are planned in Reno’s Neon Line (by the Sands Regency), historic Virginia City, at Reno Harley-Davidson, Carson City Motorsports and Battle Born Harley-Davidson in Carson City.

The World’s Biggest Little Bike Show is Friday and Saturday from 12pm to 3pm at Reno Harley-Davidson, 2315 Market Street.

Join us during Street Vibrations for the Biggest Little Bike Show in the World!
This invite only show will feature BAD ASS custom FXRs, Dynas, Softails, and Baggers!
There will be trophies & 5K in prizes!
HardDrive
Food Trucks
Yard Games
Genuine H-D Merchandise
and best of all 350+ Harley-Davidson Motorcycles in stock throughout our dealer group!!
(and they’re Cal legal if that’s something you need)
Please follow the ticket link to apply for bike entry.
Tickets: https://docs.google.com/forms/d/e/1FAIpQLSc-1bQPGeLstvw9wpDILTrCOuFcXSZCV_SiB1Qy9t3nQjN2nw/viewform

Scott Maxwell has been a Corvette enthusiast for over half of his life. He has owned a lot of Corvettes and Camaros in his 55 years.

In his words: “I have attended a lot of Car Shows and I have seen many things that I felt I could improve on. So, I decided to put my money where my mouth was and put on my own car show just before Covid hit and it was a success.”

Late last year, a friend approach Scott about doing a Car Show in Reno and after talking to him they decided that they should go ahead and move forward with it.

They began talking and meeting with multiple Hotels in Reno trying to get the amount of parking spaces needed and the number of rooms needed to put on such a large show. They ended up picking The Grand Sierra Resort to be the location and the planning started.

They wanted it to be during a time that Corvette and Camaro owners would want to take the cars out, so they picked August. One reason for August is that Hot August Nights is a popular time for Cars in Reno, but the newer cars are not allowed to enter the show.

They wanted to have a show that people could be part of if they had a newer Corvette or Camaro, but also be open to all years. They knew with Reno in August that it is very Hot, so they wanted to do an indoor show. Having a temperature-controlled environment would make it much more fun for the owners as well as the spectators.

They decided to allow attendees to come on Thursday and check in with their own VIP Check in Line for the Hotel and then go to the show registration area and get their Goodie Bag and the times for the Poker Run on Friday.

On Friday, the drivers will make their way thru the stops to get their 5 cards for their hand and the last stop will be back at Grand Sierra. The Top 3 Hands will be winning a total of $ 600.00

After the Poker Run the car owners will be able to bring their cars into the ballroom and get them parked and cleaned up for the show on Saturday and have the opportunity to grab something to eat and drink while being able to talk to their friends and fellow Car Show participants, and also have the opportunity to go gamble or eat dinner etc. or they can come back in the morning and get their cars ready.

The Corvettes and the Camaros will be judged separately and will have separate Awards and Prizes except for the Best of Show Trophy.

We have some big-name sponsors joining and advertising and donating some awesome prizes, so you don’t want to miss out!

The Corvette and Camaro Invasion of Reno Nevada brought to you by The Corvette Channel and Maita Motorsports and Chevrolet Performance promises to be one of the Best Shows on the West Coast.